We are currently registering into the dance season, please see our class list and schedule and contact us to schedule your free trial classes today!

South Florida Dance Company is proud to bring you our contemporary ballet, "The Little Mermaid". You've seen "A Christmas Carol" and "Cinderella" now let us take you under the sea, for the tale of a girl caught between two worlds with a choice to make...

"The Little Mermaid" (Danish: Den lille havfrue) is a fairy tale written by the Danish author Hans Christian Andersen about a young mermaid who is willing to give up her life in the sea and her identity as a mermaid to gain a human soul. Join us as we bring to stage this timeless tale of love, will, and sacrifice. 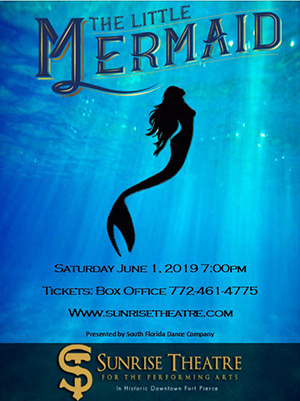 Between two worlds, land and sea, follow the story of a mermaid princess torn between wanting to live a human life and stay in the sea to fulfill her father’s wishes. She is a curious girl with an open mind to what lies beyond the waters edge. One evening a storm causes a shipwreck and the Little Mermaid rescues a fallen Prince and brings him to shore, saving his life and leaving her with the uncontrollable urge to experience his world. On land she could walk on two feet, perhaps fall in love, and live a life of real purpose.

Gravitated by her selfish desires, and without her father’s knowledge, she seeks out the magic of the Sea Witch. The Sea Witch grants the mermaid’s wish for only the temporary cost of her voice and a deadline to have the Prince fall in love with her. She has just 3 days to convince the prince to marry her, but unbeknownst to the Little Mermaid the Sea Witch has a darker plan. A plan to rule the Seas. When the Little Mermaid fails to fall in love, she will force King Triton to relinquish his power of the Sea to save his daughter. She sends a seductress, Vanessa, to woo the Prince and marry him before the Little Mermaid has the chance.

Will the Little Mermaid be banished as other lost souls? Will the Sea Witch win power over the Sea? Will good overpower evil?

CHECK OUT THE LITTLE MERMAID TRAILER ...